All images captured in the video are shown below for your reference.

As shown in the video, my favorite piece of software for planning a quick in and out guerrilla style shooting is Google Earth Pro. Be sure to download the actual desktop version, as it has the one key feature that sets it apart, the time of day and sun/shadow tracking feature.

Typically when you’re needing to be in and out quickly it’s because you’re shooting at a high value or publicly famous location without a permit. These kinds of locations tend to be modeled in 3D in Google Earth Pro, and the sun tracking feature actually will show you how the building will be lit a certain time of day from whatever perspective you wish. This is the next best thing to actually scouting the location in person.

If you are able to actually scout a location in person, but it’s not the particular time of day you are planning your shoot such as sunrise or sunset, here’s the phone apps I mentioned that let you track the sun’s path via your phone’s camera.

Although these apps aren’t free, they are a critical tool for planning that perfect shot. In terms of guerrilla shooting, when you have just minutes to spare, you need to know exactly where the car will be placed and the angle you’ll be shooting. In terms of a larger commercial production, there’s never the room to leave anything to chance, weather aside, you can control every aspect of your location planning with these above tools and methods.

As stated in the video I cover in-depth how I achieve these fake motion or Virtual Rig shots in my first LiveClass Commune class, Advanced Automotive Photoshop. Although shooting car to car is easier, using VR techniques gives you much more control over the end result, and a bit more space for creativity when it comes to shooting angles and locations. 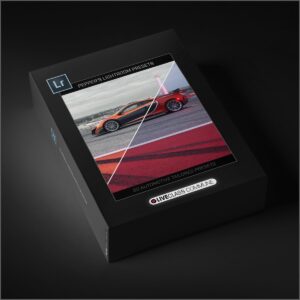